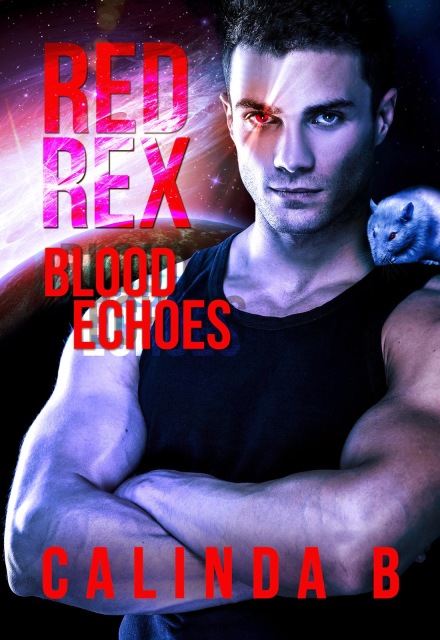 Blurbage:
“Your true name is Red Rex. The baddest of badasses, an alpha warrior beyond compare…” Or, at least, that’s what he’s been told. Eighteen year old Gaige Dupond has his life all mapped out. Lose his virginity to Emily. Get married. Become a pro soccer player and travel the world.

His father, a pure-bred Deltarc from another planet, whose race is growing extinct on planet Earth, has other plans—either confirm that he truly takes after his warrior father, and not his dearly departed empath mother, or snuff out his existence.

All plans go awry, however, when the dangerous red darkness in Gaige is awakened like a beam of hell flickering from his right eye. Pursued by a vicious Deltarc bounty hunter, Deltarc tracking hounds and his father’s wicked minions, he loses his home, his life, all that he holds dear in pursuit of the truth. In his quest to find his mother, victim to a corrupt cryopreservation project in outer space, and right the wrongs inflicted on him, he finds something far darker—his own sinister motivations and the need to feed on something other than human food. His only companion, a lab rat refugee named Sojourn, Gaige knows he’ll never be loved—not in the way he’d always envisioned. Will he find the revenge he’s seeking, or will he become an evil replica of his father? That’s the last thing he’d ever wish on himself, but it may be his only option for survival.

Excerpt: The babe he now knew as Susan slowly sauntered toward Gaige. “Mm mm mmm,” she said, her eyes making a lazy sweep of his body. “Where do you want to do this?”
Gaige cocked his head, his erection straining against his filthy jeans. “Seems a little public here. What do you have in mind?”
“Come with me.” Susan grabbed for his hand.
The skin contact stung, sending a searing shock up his arm.  His right eye began to glow like a light switch had been flipped inside.
You’re supposed to do this when they’re asleep, Red Rex.
“It’s Gaige. Gaige.”
I hear your thoughts, his rat, Sojourn, said.
Susan stilled. “What did you say?”
“The name’s Gaige. I thought you might want to know who you’re going to fuck.” Gaige grinned at her, feeling very turned on.
Susan turned to him. “Whoa, I must be drunker than I thought. I’m seeing things. Your eye’s all red, like a holiday light bulb.” She snickered, stumbled and caught her balance, grabbing Gaige’s arm. “Oh my.” She stroked his biceps. “Aren’t you solid? This will be fun.”
He closed his eyes as the red darkness gathered from her touch.
She snagged his hand and pulled him down the street.
You’re supposed to do this when they’re asleep, the rat repeated. Don’t you ever listen? In the delta or theta, not alpha or beta.
“Shut up, rat, you’re messing with my head.”
I can hear your thoughts, stupid human.
“What did you say?” She turned again, blinking and squinting. “Yep, pretty fucked up. Now you’re glowing red all over.” She shrugged and led him into a dark dirt parking lot—the kind used during day hours and abandoned at night. “Here we are. My favorite place to fuck.” She backed up to the side of a brick building, and yanked up her skirt. Next she took his hand and guided it between her legs.
No panties. Gaige, feeling like a kid in a candy store, groaned, feeling her slippery heat. The red in him flared like shooting flames.
Susan laughed. “I really shouldn’t have eaten that E-bomb.”
“You took a happy pill?” Gaige said. I wonder what that will do to her brain waves. Gaige had never done drugs in his life but the effect of her ecstasy high made his erection stiffen to the point of pain.
“Just one teensy little tab, no big deal. And right now you look like a big red fuckable male and I am very horny. Feel.” She spread her thighs wide.
He plunged a finger inside her and moaned.
I’m telling you. She needs to be asleep.
“Shut up, rat.”
She frowned and blinked. “Did you call me a rat?”
“Uh, no. Sorry. Shut up, you’re all that. All that juicy. That’s what I said. Just feel what I’m doing to you, baby.”

Author Bio:
The Fun Part: Calinda B was told early on that she should be a writer. She heard frequent praise for her writing, as well as her sense of humor. Scoffing at such admonitions and praise, she went on to pursue her life of adventure, chock full of the things that make up a well-rounded adventurous life: music (yup, she was a singer in a rock and roll band), dance (even performed hip hop in Russia), rock climbing (ever hung from a rock wall a few stories up? Yikes!), fire walking (taught high-ranking Moscow fire officials how to walk the coals), kayaking, scuba diving (she’s in love with sharks), travel, and falling in love again and again.
Living in the beautiful Pacific Northwest with the love of her life and her two cats, she has now chosen to put fingers to keyboard and write – when she’s not in pursuit of another adventure!

The Daily Grind: College educated and life-experienced, Calinda B has worked in the world of computers and technology for a long time. Before that she worked in the world of health and fitness, as well as art. Throughout her career she has relied on her writing abilities to write articles, ad copy and web content.

If your book was a movie, what would be your dream cast?

Alex Pettygrew would play Red Rex, hands down! Joaquin Phoenix for Rex’s Deltarc dad. Emily would be played by Jolie Vanier or Naomi Scott. Jaenna would be played by Caitriona Balfe, the heroine in the Outlander series – she’s tough, gutsy and tender.

Lesser characters: Kevin Spacey for Dr. Alexian. The Teacher would be Richard Kiel (if he were still alive), a 7’ 2” actor. Bryson would be played by a younger version of John C. Reilly. The bounty hunter would be a younger Steve Buscemi or Christopher Walken.