Sapphira Jones has never known love. Haunted by a past she has tried to forget, she remains distant from everyone except her best friend. Alexander Thomas, bestselling novelist, still mourns the loss of his beloved wife after nearly five years. He is incapable of love.

A series of chance encounters brings these two desolate hearts together. Desperate to remain in the life of the only man she’s ever wanted, Sapphira concocts a plan she hopes will fulfill his needs – and hers. Can she rescue him from his bleak despair? Or will the ghost of his wife prove too much for her to overcome?

Vacant Hearts is the first installment of the Vacant Hearts Trilogy, where two barren hearts collide in a tale of scorching sex and desire, love and romance.

Larkin is such a descriptive writer that I felt like I was right there with Alexander and Sapphira, they’re so realistic and well written.
I found myself pulled into Sapphira’s role, experiencing her emotions right along with her. Her insecurities are something that I believe most readers will be able to relate to. I found myself smiling and laughing over her relationship with Angie, cringing with embarrassment during the awkward moments and tearing up during the sweet ones… and maybe growling a little during a few scenes.
I was completely hooked from page one, reading about Alexander’s love for his wife and his pain over her loss broke my heart. I love the way the relationship between Sapphira and Alexander evolves, it’s almost a tangible thing that you can see and feel.
I couldn’t put the book down, the few times I tried, I kept thinking about it, wondering what was going to happen next and simply had to find out. The completely unexpected ending has me chomping at the bit to read Confessing Hearts, part two of this amazing story.
All in all, I would say that this is a must read and I’ll be keeping an eye out for other books by DJ Larkin.
~Review done by Jai

The second book in the series Confessing Hearts is available now 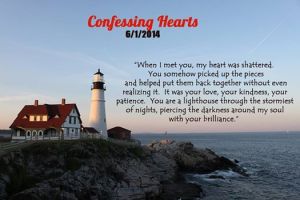